In the years after the war my father was commissioned to do a lot of industrial paintings, and he was skilled at finding a good subject to paint, from what seemed initially to be rather unpromising buildings, Jackie Setter, the artist's daughter 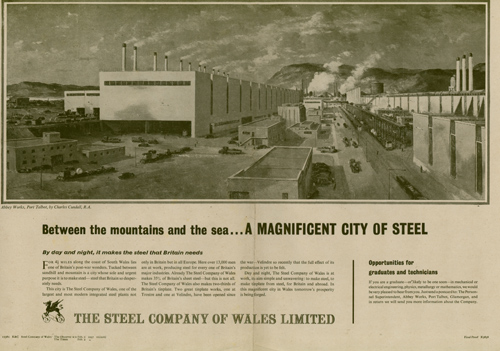 For Cundall, painting war-time industry had led on with a certain inevitability to similar peace-time subjects, and eventually to the massive modern effort of regeneration and new industrial plant. His long-standing interest in architecture, coupled with early experience of industrial design at Pilkington’s, was applied to post-war growth, and in the late 1950s he became sought-after as a chronicler of industrial buildings. Cundall treated his new subjects as he had done his old, and pointed out that ‘I’m not trying to “express the machine age” as I suppose a painter like Léger wished to do, which seems to me to lead to a kind of decoration instead of picture painting.’ Always thoughtful, he was an artist who gave serious consideration to the broader artistic implications of a new subject.

We are grateful to Jackie Setter for assistance.